Humidity and droplets can make Turbine air filters wet and increase the differential pressure drop caused by them and consequently result in more power loss of the turbine, so it is important to study the effect of humidity generated by the cooling system on the operation of filters. 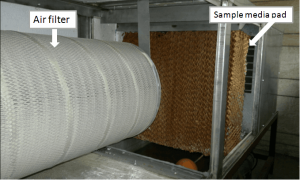 Test has been done for several days and different dirty filters. Figure 2 shows the final result of the test, so that a negligible increase of pressure drop has been observed during the cooling system operation, less than 25 Pa, for both the clean and dirty filters. It can be concluded that the cooler would have no bad effect on the filters operation and there is no need to change the existing filters with new ones, so no extra cost is needed! 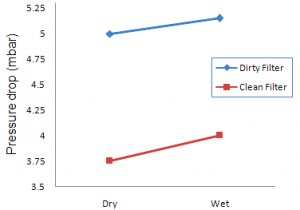 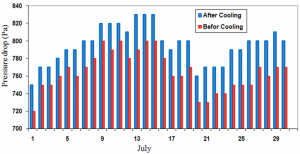 Generally, Media evaporative coolers have not been considered for pre-filtration effect, but it is known that they can act as an air washer system and remove substantial amounts of airborne particulates.

To investigate the operation of Media cooler as a pre-filter, pressure drop curves of air filters of different turbines have been depicted in Figure 4. Turbines named GT13 & GT14 are equipped with Media cooling system.

All the curves have an incremental ramp which is normal due to absorption of airborne particulates by filters, but it is obvious that the incremental ramp of the pressure drop curves related to turbines GT13 & GT14 is less than two others. Pressure drop increase of less than 100 Pa have been observed for these two units, while an increase of 150 to 200 Pa has been recorded for units GT12 and GT16. These results confirm the upstream media evaporative cooler operation as a pre-filter of the inlet air, so that less pressure drop is imposed on the air filters and more power can be generated by the turbine. 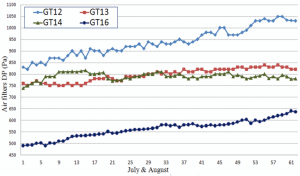 Basically, at the design condition, approximately 3/4 of the injected water evaporates and 1/4 is recycled.

To enhance pre-filtration effect & life period of Media pads, Rahavard Energy utilizes a kind of sedimentation tank (Fig.5) which has been designed to optimize water treatment process. This technology has been employed on more than 20 of Media coolers by Rahavard Energy’s experts. 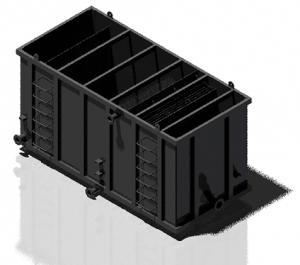 Download Pdf file of the Technical Note from here: 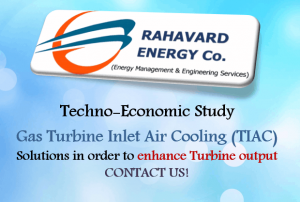 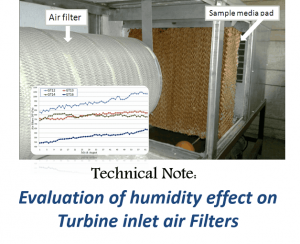 Turbine Inlet Air Cooling Technologies (TIAC) Gas turbines output power decreases with respect to ISO design condition when ambient temperature rises significantly. The results show reductions of power to be about 0.5-0.9, due to each °C ambient air temperature growth. On the other hand, demand for electric power and the value of electricity are greatest at […]